TICKET UPDATE (Sep 8): We had just over 100 people attend the concert. Thanks so much to everyone for coming out! 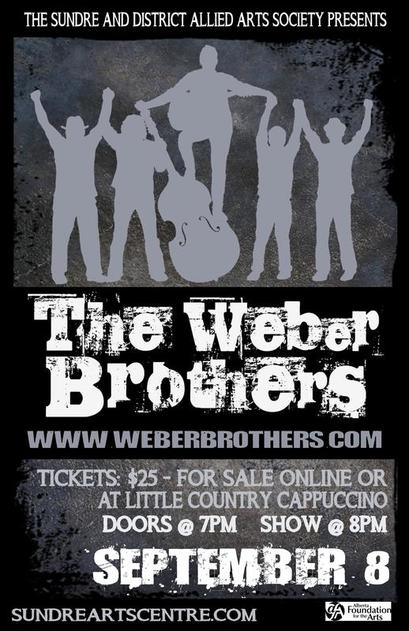 To many, The Weber Brothers are the most awe-inspiring band in the land. To many others, their story sits like an ancient volume in an old bookstore - waiting to be discovered. Regardless of what side you’re on, there’s an undeniable truth that in the rough and tumble world of rock and roll, The Weber Brothers have been around the block.

Ryan and Sam Weber left their Baltimore, MD home one night as teenagers, with the aim of meeting their idol, rockabilly legend Ronnie Hawkins. Mere months later, after surviving the intense musical apprenticeship of his fabled “Rock ‘n’ Roll Bootcamp,” they were in: full-blooded Hawks. By the ages of 18 and 21 they had already performed alongside Kris Kristofferson, Levon Helm, Garth Hudson, Jeff Healey and David Wilcox to name a few.

Over the past 15 years they’ve recorded 10 independent albums and toured extensively throughout the U.S., Canada and Europe. These days they are joined onstage by “The Browne Sound”, young hot-shot drummer Marcus Browne and his multi-instrumentalist brother Rico Browne, alongside extraordinary guitarist Emily Burgess and 3-time Canadian National Poetry Slam Champion, Prufrock Shadowrunner, creating a group dynamic that is as unique as it is powerful.

In October 2012, the brothers were invited to the Rock and Roll Hall of Fame American Music Masters Tribute to Chuck Berry in Cleveland where they shared the stage with Merle Haggard, Lemmy Kilmister, Darryl “DMC” McDaniels, Rick Derringer, Joe Bonamassa, Earl Slick, Steve Jordan and the father of Rock and Roll himself, Chuck Berry.

Please join us in welcoming The Weber Brothers to the Sundre Arts Centre! For more information and to preview music, please visit:
http://weberbrothers.com/
https://www.facebook.com/WeberBrothers/
https://itunes.apple.com/ca/artist/the-weber-brothers/id266399523

Tickets are available for $25 on August 25 at:
-Little Country Cappuccino in Sundre (cash or cheque only)
-Online: www.sdaas.eventbrite.ca

Drinks $4 - Complimentary Snacks
Doors Open at 7 PM - Performance at 8 PM - Rush Seating
*No ATM at the Facility - Please Cash or Cheque Only*
Sundre Arts Centre, 100 2nd Avenue NW, Sundre AB
www.sundreartscentre.com
ABOUT THE SUNDRE MUSIC SERIES: The Sundre Music Series is managed through a subcommittee of the Sundre & District Allied Arts Society’s Board of Directors. The Sundre & District Allied Arts Society is a registered non-profit with Alberta Corporate Affairs and registered charity with the Canada Revenue Agency. Our volunteer organization manages and maintains the Sundre Arts Centre facility. The Sundre Music Series was established to bring arts and culture to the Sundre Community through live music, as well as each concert acts as a very small fundraiser for the facility.

Enjoy an Evening Out!

We are pleased to partner with local restaurants to offer ticket holders a discount on meals the evening of the concert. Ticket holders must present their ticket stub or online ticket to restaurant staff to be eligible for the discount on the day of the concert only. Enjoy an evening out and all that the community of Sundre has to offer!
PARTICIPATING BUSINESSES - CLICK HERE
Powered by Eventbrite