SUNDRE ARTS DEVELOPMENT CENTRE
Ticket Update (Feb 1): We are just over 50% sold for our concert tomorrow night, February 2nd, with the Tanya Ryan Band! We'd love to see you out to support our Music Series - so grab a friend and join us! We're way more exciting than Netflix on a cold, winter night ;)

Get your tickets online (ticket link below), Backwoods Bakery & Cafe, or at the door! 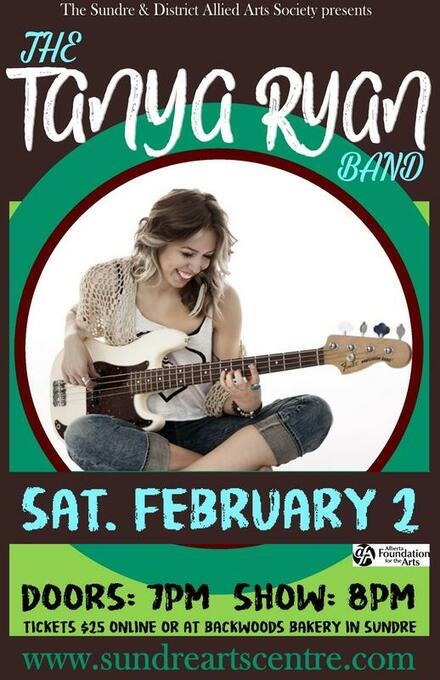 ​An Alberta favourite, Tanya Ryan, will be bringing her charming style, sweet country sounds, and full band to the Sundre Arts Centre on Saturday, February 2nd!

She has been described as Patsy Cline in high tops; smooth classic vocals with a modern approach to delivery and songwriting. Singer, songwriter, bass player, Tanya Ryan moved from Saskatoon, SK in 2008 and has rooted herself in the Foothills of Alberta where she has been honing and shaping her musicianship by playing numerous venues inter-provincially.

She has developed a signature style on-stage that audiences find difficult to ignore. Her dominant presence, solid vocals, and her witty banter have earned her the respect of audiences across Western Canada and in the music industry as a whole. These successes have led to high profile national showcase opportunities with CMT Canada (2013) and the Canadian Country Music Association’s (CCMA) Discovery Program (2014). She’s earned the title of almost every music-based competition in Alberta: taking the crown in Calgary Stampede’s Nashville North Star Contest (2012), Ponoka Stampede Talent Competition (2012) and Country 105’s Rising Star Competition (2011), among others.

Please join us in welcoming Tanya and her band to the Sundre Arts Centre! For more information and to preview music, please visit:
www.tanyaryan.ca

Tickets are available for $25 on January 19 at:
-Online (see links below)
-Backwoods Bakery & Cafe in Sundre (cash or cheque only)

ABOUT THE SUNDRE MUSIC SERIES: The Sundre Music Series is managed through a subcommittee of the Sundre & District Allied Arts Society’s Board of Directors. The Sundre & District Allied Arts Society is a registered non-profit with Alberta Corporate Affairs and registered charity with the Canada Revenue Agency. Our volunteer organization manages and maintains the Sundre Arts Centre facility. The Sundre Music Series was established to bring arts and culture to the Sundre Community through live music, as well as each concert acts as a very small fundraiser for the facility.
Click Here to Purchase Tickets Online