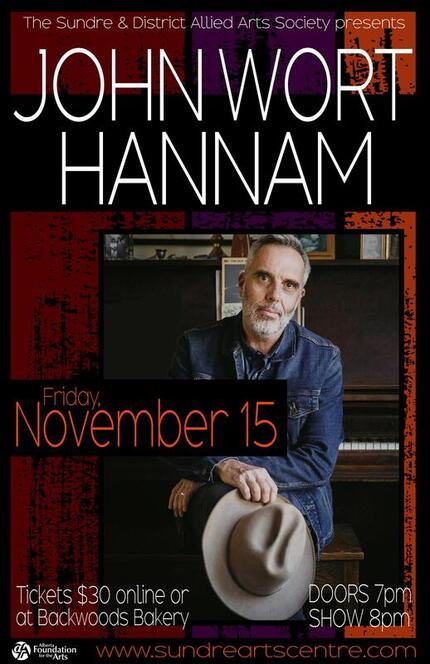 JUNO-nominated Alberta singer-songwriter John Wort Hannam will be bringing his full band and genuine stories of Canadiana to the Sundre Arts Centre on Friday, November 15th.

These days John Wort Hannam has a new sound, a new band, a new confidence, and a ton of new songs. And it’s coming across loud and clear in his live show. With his firecracker band - Jason Valleau on upright bass, Jon May on drums, Scott Duncan on fiddle, and Stephen Fletcher on keys - John is making waves in a new soundscape.

Please join us in welcoming John and his band to the Sundre Arts Centre! For more information and to preview music, please visit:
https://www.johnworthannam.com/

Tickets are available for $30 on November 1 at:
-Online
-Backwoods Bakery & Cafe in Sundre (cash or cheque only)

ABOUT THE SUNDRE MUSIC SERIES: The Sundre Music Series is managed through a subcommittee of the Sundre & District Allied Arts Society’s Board of Directors. The Sundre & District Allied Arts Society is a registered non-profit with Alberta Corporate Affairs and registered charity with the Canada Revenue Agency. Our volunteer organization manages and maintains the Sundre Arts Centre facility. The Sundre Music Series was established to bring arts and culture to the Sundre Community through live music, as well as each concert acts as a very small fundraiser for the facility.
CLICK HERE TO PURCHASE TICKETS ONLINE
Hello Arts Supporters! Volunteers are needed to help with the upcoming performance on Friday, November 15 at the Sundre Arts Centre. Duties include: FRONT OF HOUSE, BARTENDING, TABLE BUSSING, and DISH WASHING. We promise you'll enjoy the evening and that we won't work you too hard, plus you can attend the concert for free! Please email Cindy at sundre.allied.arts@gmail.com