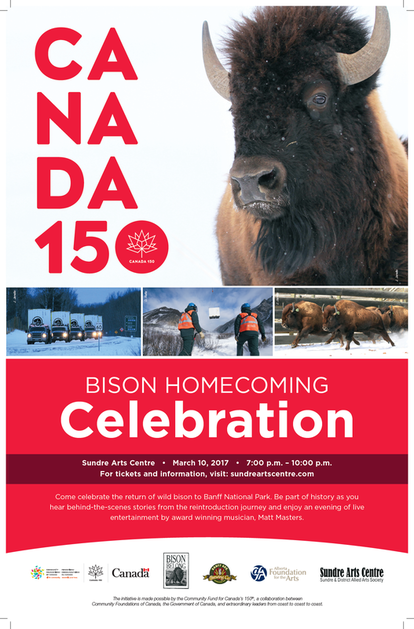 YOU ARE INVITED!
After over a century, wild bison have returned to Banff National Park. Celebrate their historic homecoming by sharing in an evening of first-hand stories from the reintroduction, live entertainment by award winning musician Matt Masters, and local fare.

More on the Matt Masters Duo: Canadian country and western singer Matt Masters is a native of Calgary, Alberta. Over the past 17 years Matt has toured extensively around Canada and has performed in 10 other countries as well. He has recorded 5 albums of original music and worked in theatre and film, both as an actor and as a composer. A married father of three, Matt also works as the Program Leader of the Alberta Music Cities initiative. An engaging storyteller with a voice as big as the Canadian Rocky Mountains, Matt Masters is a rambling troubadour with a cowboy hat and a well-worn passport. Career highlights include: travelling to Austria to perform for the Canadian Ambassador (2016); narrating the official Centennial show of the world famous Calgary Stampede from horseback to over 150,000 people (2012); and performing as the house band for the Calgary Flames (2009). Since 2007, Matt has been a member of the Barney Bentall’s Cariboo Express, a fund raising band that has raised almost one million dollars for western Canadian charities. Matt has performed alongside and opened for: Jeff Healey, Jim Cuddy, Buddy Guy, Johnny Reid, Paul Brandt, Corb Lund, Neko Case and many many more.

Please join us in welcoming the Matt Masters Duo to the Sundre Arts Centre! For more information about Matt and to preview music, please visit:
-Facebook and Twitter
-iTunes albums: ‘Centennial Swell’ and ‘All Western Winners’
-YouTube

Tickets are available for $20 at:
-Online: www.sdaas.eventbrite.ca
-Little Country Cappuccino in Sundre (cash or cheque only)

This celebration event is cosponsored by: Banff National Park, Bison Belong, and the Sundre & District Allied Arts Society. This initiative is made possible by the Community Fund for Canada's 150th, a collaboration between Bison Belong, the Government of Canada, and extraordinary leaders from coast to coast to coast.