TICKET UPDATES (Oct 22): SOLD OUT! Please use the Waitlist feature for our online inventory. We will release more tickets if any become available. 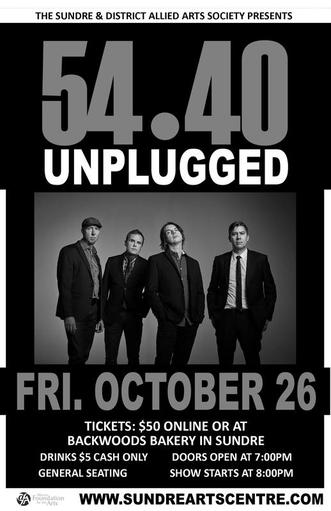 Canada’s own, and much loved, 54•40 will be bringing their acoustic show to the Sundre Arts Centre on Friday, October 26th!

From the opening guitar riff of ‘Ocean Pearl’, or the unforgettable baritone hook of ‘I Go Blind’, if you grew up in Canada in the 90’s, 54•40 was the soundtrack to your childhood, whether you knew it or not. For many more seasoned fans, they were the post-punk icons that leapt from the early 80s Vancouver dive-bar scene and landed confidently on the international stadium stage. With over a million records sold worldwide, a career spanning 30 years and a catalogue of hits that occupy the airways to this day, singer-songwriter-front man Neil Osborne still finds himself with a restless soul.

The search for new musical frontiers can often lead to unexpected places. In 2014 Neil and the band found themselves striking gold and beginning to develop an idea unlike anything they had ever attempted. These were the early stages of a double album that spans decades and finds the band rediscovering their roots while pushing their sound to a very new place.

Produced by Dave ‘Rave’ Ogilive, it is an intimate and unplugged reimagining of 54•40’s greatest hits recorded as you’ve never heard them before. Featuring original arrangements of violin, guitar, banjo, mandolin and more by guest musician Daniel Lapp, History gives new context and spirit to 10 classic songs fans all know and love. Re-approaching songs from the past is something the band had never thought they would do.

Please join us in welcoming 54•40 to the Sundre Arts Centre! For more information and to preview music, please visit:
https://www.5440.com/unplugged/

Tickets are available for $50 on October 12 at 7:30 AM at:
-Online (see links below)
-Backwoods Bakery & Cafe in Sundre (cash or cheque only)

ABOUT THE SUNDRE MUSIC SERIES: The Sundre Music Series is managed through a subcommittee of the Sundre & District Allied Arts Society’s Board of Directors. The Sundre & District Allied Arts Society is a registered non-profit with Alberta Corporate Affairs and registered charity with the Canada Revenue Agency. Our volunteer organization manages and maintains the Sundre Arts Centre facility. The Sundre Music Series was established to bring arts and culture to the Sundre Community through live music, as well as each concert acts as a very small fundraiser for the facility.
Click Here to Purchase Tickets Online
CALL FOR VOLUNTEERS: Hello Music Series Supporters! Volunteers are needed to help with our upcoming concert. We have a variety of duties available that include tickets, bartending, table bussing, and dish washing. You get to enjoy a concert and a few complimentary drinks. To volunteer, please email Cindy.