Ticket Update (Mar 23, 9:30 AM): The upcoming concert is 50% sold! 20 tickets remain at Little Country Cappuccino and 46 tickets remain online. Look forward to seeing you on Saturday! 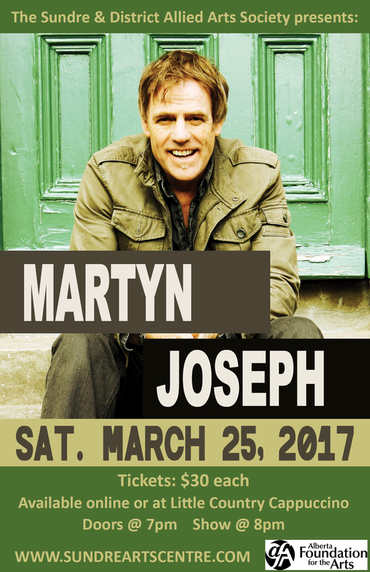 Martyn Joseph is a powerful singer and songwriter gifted with the rare ability to speak to the soul with his expressive and poignant lyrics. With a career spanning 30 years, 32 albums, over a half a million record sales and thousands of live performances, the versatility of his music touches genres of folk, rock, soul, folk funk and Americana, yet somehow all these labels cannot define the spirit of his music. Compared to Bruce Springsteen, John Mayer, Bruce Cockburn and Dave Matthews, he has created his own style and reputation as a mesmerising live performer and stands in his own right, built on a reputation for giving what thousands have described as the best live music experience of their lives. A unique talent driven by passion, social awareness and love for his trade, his music manages to empower and speak for the many. He’s a jaw dropping guitar player who has developed a unique percussive style, teamed up with a powerful show stopping voice, and has been called “The Welsh Springsteen”. Martyn was awarded Best Male Artist at the 2004 BBC Welsh Music Awards and in 2012 his song “There’s Always Maybe” won the best folk song category in the World Independent Music Awards. In addition to his 5 top 50 UK hits, the importance of his work has been recognised by programmes such as BBC 2’s prime time series on Singer/Songwriters. Social justice has an essential presence throughout his music, which has been recognised with various humanitarian awards and plaudits.

Please join us in welcoming Martyn back to the Sundre Arts Centre! For more information about Martyn and to preview music, please visit:
http://www.martynjoseph.net/
https://www.facebook.com/pages/Martyn-Joseph/66135460368
https://itunes.apple.com/ca/artist/martyn-joseph/id83475545

Tickets are available (9:00AM, Saturday, 11 March 2017) for $30 at:
-Little Country Cappuccino in Sundre (cash or cheque only)
-Online: www.sdaas.eventbrite.ca